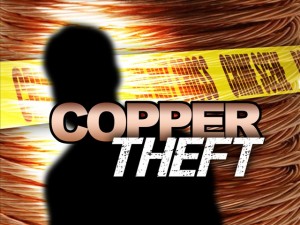 Being knowledgeable about copper theft can save your business thousands of dollars. Whether you have an apartment complex, construction site, office building, vacant home, etc., you are on a Targeted List. Why? To thieves, copper is the new Gold Rush and has been for the last few years. The current price for copper has been increasing which means thieves get a higher payday when they recycle (cash-in) your stolen copper.

There is currently an empire being built around this; reason being is due to accessibility, being untraceable, and a rise in the price of copper.

Why is Copper Theft Increasing?

“People steal copper wire and pipe and sell it by the pound,” according to Catawba County Sheriff Coy Reid; some get creative and mastermind a complete heist. There have been reports where criminals have taken more than 300 feet of copper pipe used for air conditioning and more than 2,000 feet of cable used for a communications company – the group of thieves cut down the cable from telephone poles and hauled it away, causing tens of thousands of dollars in damage.

“It’s not just the cost or loss of the copper, thieves also leave water gushing out of pipes, walls and floors torn and ripped apart to gain access which causes thousands of dollars in damages just getting to the copper, this is a major devastation to any home builder or property owner”- Security Expert Glenn Jones added.

“Once thieves strip copper pipes and other metals from a vacant home, conventional financing is harder to obtain and the sale price could plummet,” said Eric Berman, spokesman for the Massachusetts Association of Realtors.

This type of theft is occurring both day and night; thieves work alone or in groups – many look homeless, dress in very casual clothing, or try to blend in and look like construction workers. Very few tools are needed to do this and because of copper’s light weight, a bag full of it can be bent and carried off by one person. Often they will return to the same area, especially vacant apartment buildings, construction sites and new home developments, as they know very few people are there and no one is watching; they use the structure itself to hide inside while committing their crime.

How to Prevent Copper Theft?

What can you do?

Lights and fences won’t deter these perpetrators at all, as they are after the gold that is inside your property and they will stop at nothing to get it; also, purchasing surveillance cameras won’t be much help, you’ll be lucky if you capture a glimpse of the person’s profile. Remember cameras don’t stop crime they just record it. This type of crime can only be stopped with a posted officer on the property.

For the price you’ll pay for having just one apartment or home victimized, you could have a uniformed and posted guard on your property for a month. Yes, you may have insurance; however, the new repairs will delay your sale or lease of the home or property which costs you even more money. Often, insurance rates will increase and they will not allow too many claims before they demand security, increase your rates, or cancel your policy – something to consider.

Remove yourself from the targeted list and eliminate the frustration of dealing with your insurance company and increased rates. To prevent copper theft on your property, give SRS Services a call now!