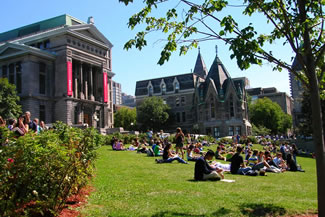 It is important to have a security guard service at college campuses or universities. Statistically, crimes are less likely to occur if security officers are present. Criminals tend to seek out locations that don’t have security and areas that leave many vulnerable, e.g. dark parking lots, hallways, walkways/passages, wooded areas, parks, etc. Most criminals aren’t willing to risk being identified and consequently arrested, so they opt for the easier route – places with no safety precautions. Having uniformed officers is significant to the safety of public and private educational institutions.

As you’ve seen in recent news, school shootings are becoming more and more prevalent. Parents are no longer viewing schools as safe havens; their worries intensify for fear of some irrational individual(s) with nothing to lose doing the unthinkable. Having posted security guards throughout the premises can vastly diminish criminal acts from occurring; again, a perpetrator is far less likely to commit a crime if he knows security is on the property.

“A student hid quietly in a small room with dozens of classmates after gunshots erupted in a courtyard on his college campus. He told the media, I didn’t think something like this could happen; you don’t think about it happening to you.

A volley of gunshots at Lone Star College prompted a lockdown and eventual evacuation of the campus in north Houston. In the end, three people were hospitalized, including a maintenance worker caught in the crossfire and two others who authorities believe were involved in the gunfire.

At least 10 patrol cars clustered on the campus’ west side as emergency personnel tended to the wounded and loaded them on stretchers. Students led by officers ran from the buildings where they had been hiding as authorities evacuated the campus.” Juan A. Lozano and Michael Graczyk

Having posted security officers on location would have made this man think twice about pulling his gun out.

Security guards are equipped with the necessary skills and tools to mitigate the possibility of theft, vandalism, and injury to staff, visitors, and students. A security professional has adequate training to effectively deescalate volatile situations. Rather than being bogged down with the possibility of crime being committed on the property, the faculty and students can focus on education.

The Writings on the Wall

Not only will security officers guard the staff and student-body, they will also ensure the building is protected. Graffiti and other types of vandalism are common acts of violence against schools. Security guards are able to stand watch and prevent this from taking place; thus, allowing the students and staff members to feel safe, and keep the building and property professional looking and appealing.

Colleges today need to protect their students and employees, and hiring a security guard service is a step in the right direction for any university or college campus. Speak to a security consultant today and get the high-level protection your institution deserves.